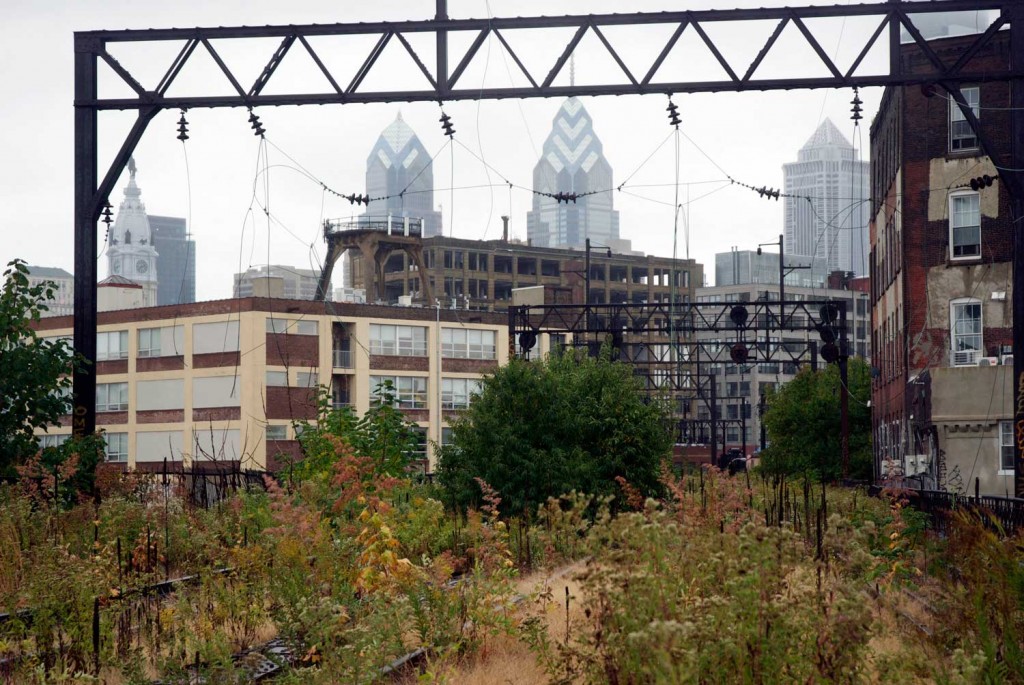 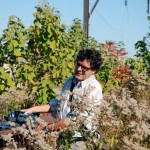 Over the past year I’ve made two visits to the old Reading Railroad’s elevated viaduct, both times led by Paul and his infectious enthusiasm for the Place (capitalization intended…). Paul never conducts a tour without an iPad, because just as important as the sights one can see now — former warehouses and industrial buildings, the Philly skyline (including William Penn himself, looking down on the city from a pedestal) — is the history of the railroad and the neighborhoods it once traversed. On the iPad are photos of sites we pass on our tour, from the historic Reading Terminal Market and the old Baldwin Locomotive Works to neighborhood streets in the Callowhill district 100 years ago. “See over there,” he points, “and now here,” swiping the iPad so it shows a black & white photo of a familiar but long-ago scene. We begin to understand the layers of place that surround us. Once the VIADUCTgreene project is a reality its three miles of underground tunnels and elevated park will enable visitors to traverse some 55 busy city blocks without crossing a single street. The city of Philadelphia will have a new stage for natives and tourists alike to stand upon and absorb its great history. Reading International, successor to the Reading Railroad, holds a great deal of power over the future of the old viaduct, which for a century carried passengers (including, I believe, my own mother when she was a little girl) and mail. Based in Los Angeles, Reading today describes itself a “cinema exhibition and real estate company,” and it continues to own portions of the elevated structure. Over the past several months workers hired by Reading have been stripping the vegetation — considered by horticulturists to be remarkably rich in diversity, not unlike the “wild garden” of the abandoned High Line in New York — and, most distressing, removing the viaduct’s historical bones, its steel rails. What is unclear is whether Reading is tagging and storing the tracks, as Friends of the High Line did during its remediation project, so they may be returned when VIADUCTgreene reopens as a public park. On the High Line, the old New York Central tracks are a fundamental part of the park’s design and the rich experience that visitors have there. Not only did the designers replace the rails in their original locations but they also left the weird markings that only an architect could understand. Some look like complex mathematical calculations, and leave tourists scratching their heads as they pass by. But today these rails tell two important stories at once: of Manhattan’s elevated freight railroad of 1934 – 1980, and of a decade-long reclamation project that took place early in the 21st century. What a priceless teachable moment, right there in the middle of a gorgeous garden. I’ve seen photographs of the “clear-cutting” (as one person described it) and rail removal that’s going on in Philadelphia, and they are heart-breaking. Reading’s CEO, John Hunter, has failed to reply to my repeated emails asking if the tracks are being stored for future use, but hope springs eternal.

Today I urge Mr. Hunter to heed the words of James Corner, the landscape architect who helped create the High Line. Perhaps then he will then become inspired and motivated to do right by the people of Philadelphia. Mr. Corner said a remarkable thing at a recent public meeting about the future of the High Line. Speaking of section three, which wraps majestically around the West Side Rail Yards and presents stunning views of the Hudson River, he pointed to architectural renderings that show an “interim walkway” that the architects will install alongside the existing tracks and vegetation. Once in place, visitors will cross an invisible line from the more polished, architecturally elegant High Line of Gansevoort to 30th Street, and into a space that recalls, on both sides of the path, the wild garden that the abandoned rail bed became after the freight trains stopped running. There will be plenty of the High Line-ish amenities we have come to know and love: “peel-up” benches and muted, romantic, lighting, as well as new features like an area for children to play. But in section three the show-stopper is the Place itself: the wild garden that so many early trespassers first fell in love with, running toward, and then parallel to, the mighty Hudson, birthplace of American trade and the railroad’s indispensable partner. What the architects are doing is, I think, quite brilliant: they are giving visitors the opportunity to observe the historic railroad alongside, and in harmony with, the modern park that it later became. Old and new, side by side, each informing the other.

In characterizing the plan at the March 2012 meeting Corner predicted that “modesty would be its real power.” The goal, he explained, was not to “design something cool…but [to allow people to experience] what’s really cool, which is the context.” And that context is history, layers that spool back in time from the waving fields of Queen Anne’s Lace that we see now to the days of Robert Moses and his West Side Improvement, which conceived the idea of putting locomotives 30 feet in the air and then built the High Line to make it happen.

Earlier, in an interview with Fast Company, Corner had described what motivated the original design of the elevated park. “The High Line is a great example of making something new. When we got hired to design it, the first thing we did was go and look at it and stand on it for the first time. And the immediate feeling was, How do we not mess this up? Because what we found there was so special and strange that any design needed to amplify those conditions.” This was the precious principle that everyone involved in the High Line understood from the very beginning: that in making something new, the essence of what was old, original, authentic, had to be preserved. If New York — and the all the other cities of the world that are looking to us for inspiration — owes a debt of gratitude to Friends of the High Line co-founders Joshua David and Robert Hammond, it is surely this.

It gave me great pleasure to read VanMeter and Murphy’s piece, and to see that they and their colleagues in Philadelphia also understand this seemingly simple truth about cities today.  Corner also said to the Fast Company reporter: “There’s an edginess and urban appeal that comes with these sites. It would be a shame to erase any sign of their histories.”

Are you listening, Mr. Hunter? The High Line at the West Side Rail Yards, July 2011

Next post: The West Side Cowboy & The High Line: A Birthday Tribute