On the 10th anniversary of the opening of the High Line, here’s a tribute to the real leading man in this drama, the West Side Cowboy.

Dave Goddess wrote his song last year, inspired by the story of George Hayde, who has been recognized as the last horseman to lead a train up Tenth Avenue.

Click here for the full story of George’s final ride, which took place on March 29, 1941 aboard his trusty steed, Cyclone.

Song of the Urban Cowboy

Hey, the past is past, so gather ’round boys. Let’s all raise a glass to last of the West Side Cowboys….

George Hayde, New York’s  last urban cowboy, finally has his own song, and it’s rockin’ great. Put that drink down before you click the link because it’s gonna topple with the first chord.

Dave Goddess, who lives on Tenth Avenue, was inspired to write the song after he learned about the 1850s ordinance requiring a man on horseback to precede and follow every train as it made its way up and down the city streets. One day a few friends who were visiting from Denmark insisted he join them on a tour of the High Line. When “the guide told the story I was floored. It’s both surreal and poetic. I tried to imagine the seedy Meatpacking District of 80 years ago with its tenements, prostitutes, and hundreds of slaughterhouses. I invented a backstory about George Hayde and wrote the tune about his last ride. When I was finished I realized that my song was just as much about obsolescence. What does a workingman do when his job goes away because times are changing? It’s a scenario we’re still dealing with today.”

The Dave Goddess Group  — Mark Buschi on bass, Tom Brobst on keys and sax, Chris Cummings on drums and Gary Gipson on guitar — just released its new EP. There’s a good interview here about how they work together and Dave’s philosophy of music-making. I didn’t know this band but I’m a new and ardent fan.

And for those looking for more about the West Side Cowboy, this is the link to my tiny documentary made from rare 1930s footage of an actual train — and cowboy — steaming up Tenth Avenue. This link goes to the full story of George Hayde’s final ride. And this one is my own story of first learning about New York’s cowboy from my brother-in-law’s grandfather, Steven Hirsch, who chased trains as a boy and never forgot about it. Tagged as: Men at work, west side cowboy 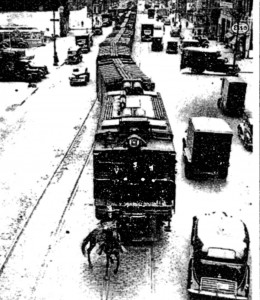 The picture captures George Hayde, age twenty-one, who became New York City’s last urban cowboy with this final ride up Tenth Avenue. He and “his faithful bay, Cyclone” were leading a line of fourteen rail cars loaded with oranges. They were performing, for the last time in history, a unique job created by an 185os city ordinance that permitted freight trains to share the busy streets with pedestrians, dog-carts, bicycles, cars and trucks, on condition they observe a speed limit of six miles per hour and that “a proper person… precede the trains on horseback to give necessary warning in a suitable manner on their approach.” [For rare video of the West Side Cowboy riding up Tenth Avenue, click here.]
END_OF_DOCUMENT_TOKEN_TO_BE_REPLACED